#TURNUPTURNON Your County needs your support 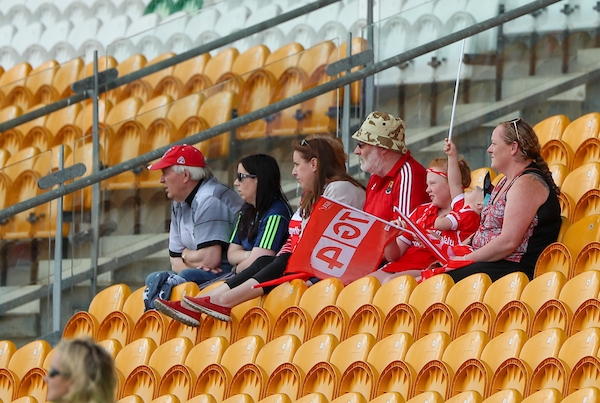 THE LGFA and Championship sponsors TG4 are urging supporters of Ladies Gaelic Football – and potential new fans – to Turn Up at next Sunday’s Senior Championship semi-finals at Croke Park, or Turn On to watch the games on TG4.

For the very first time, Croke Park will host the TG4 All-Ireland Senior Championship semi-finals, and there’s a cracking double-bill in store at the famous venue.

At 2pm, Connacht rivals Galway and Mayo will lock horns in the quest for a Final spot at Croke Park on Sunday, September 15, before Dublin, the reigning TG4 All-Ireland Senior Champions, battle it out with Lidl National League Division 1 holders Cork.

Galway and Mayo renew acquaintances after a replay was required to separate the two teams in the Provincial Final, with Galway coming out on top.

Dublin and Cork meet for the first time since the Lidl NFL Division 1 semi-final at Nowlan Park, a classic tie that went to extra-time before Cork prevailed.

This is also a repeat meeting of the 2018 TG4 All-Ireland Senior Final, which was played out in front of a record 50,141 attendance at Croke Park.

If you can’t make it to the games on Sunday, the LGFA and TG4 are urging fans all over the country to Turn On TG4 and watch the matches LIVE on TV, as we launch the #TurnUpTurnOn campaign.

We’re asking pubs, clubs, restaurants, hotels, other local businesses and home-owners all over Ireland and abroad to Turn on TG4 and tune in to watch the cream of the crop battle it out for the two coveted Final slots on offer.

TG4’s coverage attracts a significant TV audience in Ireland and globally on the TG4 Player www.tg4.tv.

Speaking on behalf of TG4, Director General Alan Esslemont said: “I congratulate the LGFA for creating an historic first Croke Park showcase for this year’s semi-finals, which will give the players and teams a fitting stage for two matches are certain to be very strongly contested.

“TG4 puts women’s sport at the heart of our programming strategy and we are delighted to support the #TurnUpTurnOn campaign.

“Growing both crowds and viewers for Ladies Gaelic Football puts a spotlight on Ireland’s most popular women’s sport but also blazes a trail where we hope that other Irish female athletes can follow.

“So please, Turn Up at Croke Park on Sunday or Turn On to TG4.  If you don’t you’ll have missed something very special indeed!”

Marie Hickey, President of the Ladies Gaelic Football Association, commented: “We are hugely enthused by the prospect of hosting our 2019 TG4 All-Ireland Senior Championship semi-finals at Croke Park.

“We had a record attendance for the 2018 Finals and we’re hoping for another bumper crowd as Galway, Mayo, Dublin and Cork prepare for their semi-finals.

“The prize on offer for the winners of these games is huge, as they will play at 4pm on Sunday, September 15, in the TG4 All-Ireland Senior Championship Final.

“We would love to see a huge attendance next Sunday and we want as many people as possible to Turn Up at Croke Park.

“However, if you can’t make it to the games, we would ask as many people as possible to Turn On TG4 and watch what should be two superb exhibitions of Ladies Gaelic Football.

“I am delighted to announce this #TurnUpTurnOn campaign and I’m also urging people all over Ireland, and abroad, to send us your pictures and videos of you watching the games, and to use the #TurnUpTurnOn hashtag.”

Everybody who uses the #TurnUpTurnOn hashtag during the build-up to next Sunday’s games, and on matchday itself, will be entered into a draw to win tickets for the TG4 All-Ireland Senior Championship Finals on Sunday, September 15.

It doesn’t matter whether whether you’re planning to travel to Croke Park or watch on TV – you’re still eligible to enter by posting your pictures and messages with the #TurnUpTurnOn hashtag.

Win a Supporters day out thanks to Supervalu

Goals from O’Connor and Aherne send Dublin through.
Scroll to top