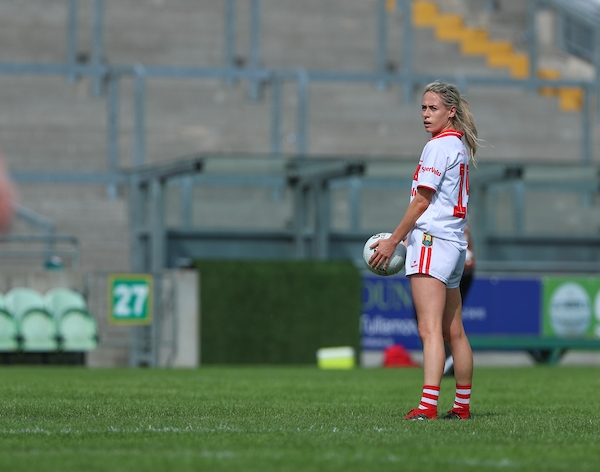 On an historic day at Páirc Uí Chaoimh the Cork ladies footballers got the defence of their Lidl National Football League title off to a winning start thanks largely to Orla Finn’s early flurry of scores.

This league clash against Westmeath was the first time the Cork senior ladies played a competitive game at the Páirc and the home side were determined not to come out on the wrong side of the scoreline.

Cork were five points clear at half-time, but a strong third quarter from Sean Finnegan’s side meant they needed three late scores to make sure of victory.

Finn wrote her own little bit of history as she got the first score in a competitive ladies football game at the venue to put Cork in front in the second minute. She added their second after eight minutes as the home side were dominating the early exchanges.

Two minutes later and Finn kicked her third point as Westmeath were finding it difficult to get the ball out of their own half, and her fourth soon followed.

Leona Archibold finally got Westmeath on the scoreboard from a 13th minute free, but Cork continued to dominate and Laura O’Mahony scored from distance to keep them four points to the good.

From the re-start Cork regained possession and this time it was Eimer Scally who wrote herself into the history books. She latched onto a loose ball in the Westmeath defence to become the first ladies footballer to score a goal at the stadium, a score that made it 1-5 to 0-1 after 18 minutes. Unfortunately for Scally and Cork she went off injured just before half-time.

However Cork won’t be happy how they finished the first-half, as they failed to score again after Scally’s goal. Rachel Dillon and Lucy McCartan pointed for Westmeath to reduce the deficit and it took a great block from Ashling Hutchings to deny them a goal.

Vicky Carr played McCartan in but her goal-bound effort was well blocked by Hutchings to see Cork lead 1-5 to 0-3 at half-time.

Scores were few and far between in the second-half with both sides tiring. Finn extended Cork’s lead before Jo Hanna Maher pulled a point back for Westmeath.

It took a great last ditch tackle from Dillon to deny Cork a goal, before Aoife Connolly was on target for the visitors, to make it 1-6 to 0-5.

With ten minutes remaining Caoimhe O’Callaghan was sin-binned for Cork for persistent fouling, but her side continued to dominate, and three quick points from Finn, Laura Cleary and Ciara McCarthy made sure of the win.

There was one last kick from Westmeath as Connolly got the last score of the game, but there was no stopping Cork as they got the defence of their title off to a winning start.

Brace of goals from Áine O’Sullivan gives Cork the points in all-Munster...
Scroll to top